I love this event, the coastline of Angelsea Victoria is just breathtaking, especially when the sun hits it at sunrise. We sure are spoilt for choice when it comes to events in this country and the guys at Rapid Ascent know how to put on a  well organised, first class event.

My new back pack had arrived at the beginning of the week, I was in two minds about using it as it’s a completely different style to what I am used to and thought I may need a bit more time to test it out.  It quickly became apparent that I had received the right advice from Sally of Barefoot Inc., the pack didn’t move and is so light weight and comfortable, love it. 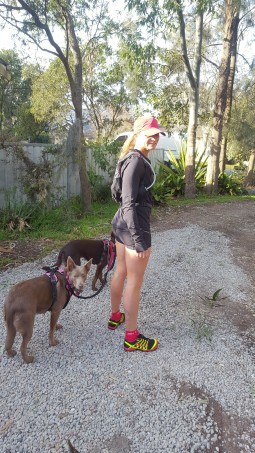 After a hectic week I wished I had been a bit better organised, I threw the gear I thought we would need into the van and decided to figure it out as we go, and as you do, you always pack way too much.

So for this event I stuck a little note on the fridge that I had written 50km, 5hrs. But when I was packing my running gear, without telling anyone, I wrote out on a little piece of paper 4hrs 43min. Covered it in sticky tape to make it waterproof and stuck it in the back pocket of my shorts. My training was on point and thanks to my coach Shona Stephenson I had been working on increasing my speed, so I was certain I could run sub 5hrs.

We drive the 13hr trip with all three dogs in the van, thankfully they are well behaved, Pace (my red Kelpie) is a bit of a lunatic at times, so it was going to be interesting to see how she coped with her first road trip, to my surprise she was actually really good.

When we arrived, Angelsea turned out to be much colder than I had hoped, the event was well set up with just a few late vendors doing some last minute adjustments, collected my bib and event shirt, love the shirt !! awesome quality and fits perfectly. Watched the kids event, just amazes me how fast those little legs can go !

Listened to the briefing to see if I could ditch the thermal shirt out of my pack and headed back to the van ready for a good nights sleep.

The alarm goes off at 4.30am, get myself ready tape my gaiters down so I don’t get sand in my shoes as the first 21km’s follows the coastline on the beach. Head down to the start line where a couple of thousand runners and spectators where all eagerly waiting. Thought I had positioned myself up the front and was surprised to see how many people were in front of me as we took off.

The course had slightly changed from last year, which is a good thing as we didn’t hit the soap rocks so soon. I also don’t remember it being so dark last year and was disappointed that I would miss seeing the first section of rock cliffs hit by the first rays of sunlight. 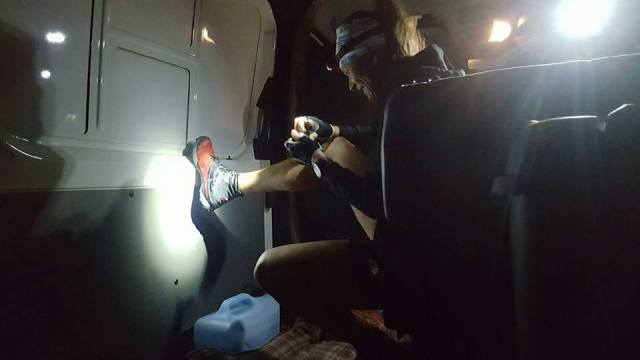 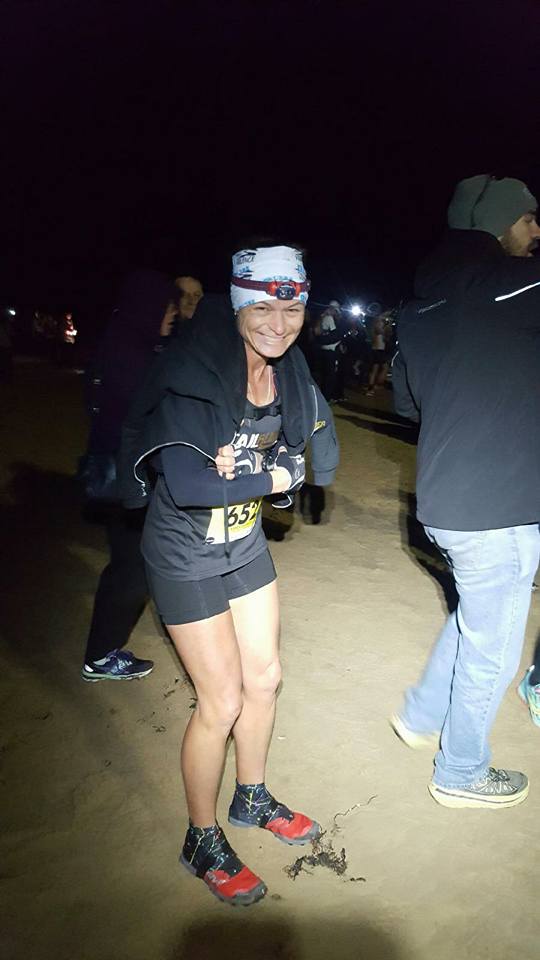 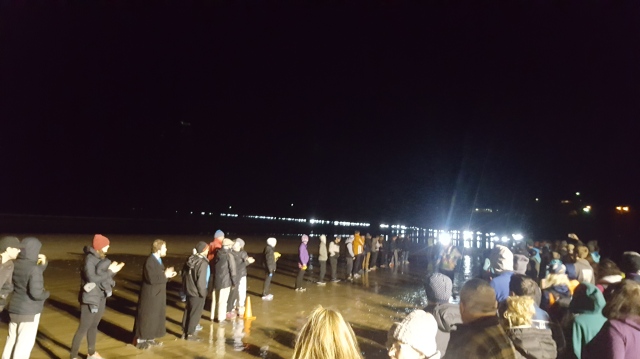 Head torches line the coast line for as far as the eye could see, love the loop back past the start, the waiting crowd makes you feel like a rock star ! Lol     Thankfully I had already passed through when this photo was taken, I had no idea there were some many people behind me. Such a great turn out.

Rock Hopping
Last year I came a cropper over the rocks, they are slippery, sharp and jagged, I still bare the scar today. This year I decided not to “follow” anyone and managed to pick my way and hopped through them quite quickly, I even heard a bloke behind me say to his friend “we should be following her, she is managing to pick really good lines through the rocks” next minute a had a line of people behind me Lol

That was one thing I made a conscious decision to do pretty well all day, especially on the sand and that was not to follow anyone and pick my own lines; because it struck me that the runners looked like precession caterpillars, not really watching where they were going, just following the person in front. The sand was getting all chopped up and harder to run through so I kept as close to the waters edge as possible, not worrying if my feet got wet.

We come to a narrow section of cliff, there was a bit of a bottle neck as everyone was trying and get around, I decided to just go through the water, not realising it would come up to my chest. Well that was a bit of a rude shock, glad I wasn’t worried about getting my shoes wet ! Lol

Speaking of shoes, I am so glad I chose to wear the inov8 X-Talon225, the grippy sole on them made it so much easier on the rocks this year, seriously could not have chosen a better shoe. I also noticed on the start line that Steph Auston was wearing inov8’s.

Check Points
Stoked to see Joe at the 21km mark with my Tailwind, quick chat, change over my flask and I’m out of there. Through some crushed granite trails, timber board walk and my favourite the single trail coastal heath, although I collected my head on a low branch and cursed wishing I was shorter.  Next check point 32km, change my hydration flask over, Joe says your doing awesome, my response “really ? I don’t feel it” your about 10th female, he stuffs some lollies in my hand and says make sure you eat some sugar as I run off.

Next sign I see says “Go 50km Runners, its all down hill from here” they lied !! It was mostly up hill, that is not funny. Through some more single trail, bit of technical stuff, fire trail, past the cabin and back onto the sand, Wohoo !!, I know the finish line is close now !! I still feel strong and can manage to sprint on the sand to the finish line.

I cross the finish line and look at my watch, well I’ll be buggered 4hrs and 43mins, could not have planned that any better !! I pulled the piece of paper out of my back pocket and showed Joe, I couldn’t believe it.

Damn maybe I should have written 34min !! Lol

Asked how Steph went, found out she was an hour in front of me and finished first overall !! Incredible effort she sure is making a name for herself on the trail scene, she is fierce.

Sprint to the finish, can you see the time !! 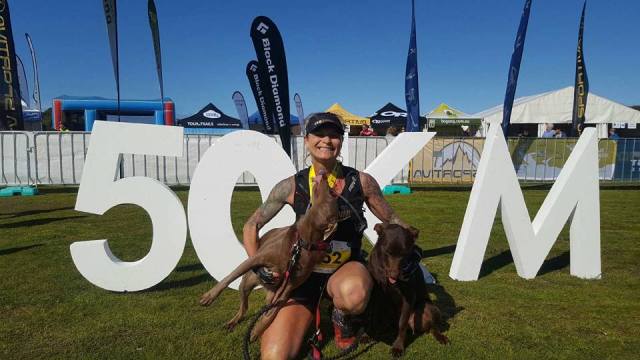 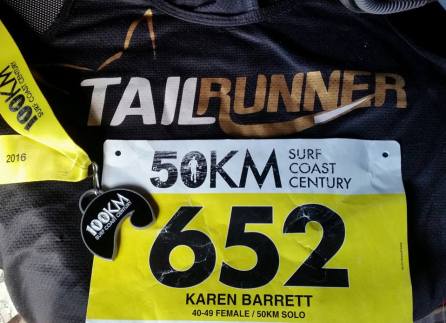 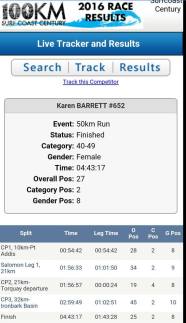